Ugh. I feel so bleghhh.

If you follow my blog, you know I was diagnosed with Bipolar II disorder again earlier this year after about, oh, ten years of denial. This time, I decided maybe this year would be a good year to start treating that pesky little mood disorder since I was treating my alcoholism as well. I had a steady doctor for about 6 months, then got insurance through my job so I had to go to a new doctor.

Seeing a new doctor is NEVER EVER FUN.

At least not for me.

These days, doctors are a lot more thorough about prescribing meds, too. This is refreshing because when I first started being treated for a variety of mental ailments when I was 19, it seemed like the doctors would just throw any pill packets my way and that was that. Nooow, I have to go through a super tedious, hours-long appointment so they make sure they are giving me the right stuff. Which I like. Still, a pain in the ass.

So this appointment was like that. I had mostly all good things to report except that I’d stopped taking my medication because I ran out and was only taking one of the prescribed meds. The doctor seemed okay with that (I was on Latuda and ran out so I continued taking only Abilify) and she made the remark that she doesn’t understand why my other doctor would put me on both. *eye roll*

This is the other frustrating thing about doctors appointments. My doctors NEVER seem to agree with whatever a previous doctor has said or done. Its like, wtf.

Anyway, she doubled my dose of my medication and it has me feeling super shitty. I have to double the dose though because, as it was explained to me, I run the risk of going into a manic episode with the low dosage I was on. My other doctor had mentioned this to me before, too, which is why she had me on both medications 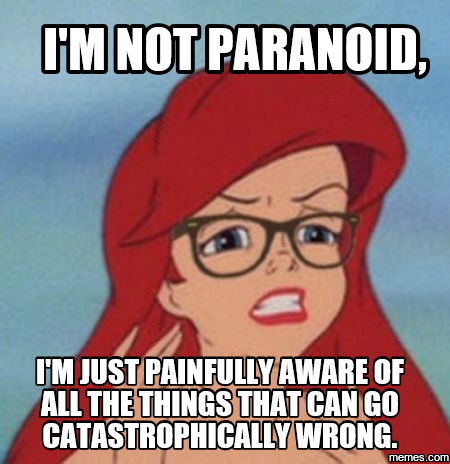 Manic episodes, I will shamefully admit, are kind of fun to me but they are actually really dangerous. When I originally started with Latuda, I went into full blown mania after each dosage which made me come up with all kinds of ideas and I’d draw for hours at a time and want to talk to EVERYONE.

But they are also really not fun and very irritating. I wasn’t sleeping at all so my eyes would have giant bags under them and I’d be so hyper and energetic that I couldn’t sit still through groups (this is when I was in rehab). Nothing I did felt like “enough” and that’s a VERY unsettling feeling… So, I see why it’s important to avoid these episodes.

The other thing  (I guess I’m using this as a rant against my new doctor) is that I told her about the amazing support group I have developed and how being “out” about my alcoholism is really helping me stay sober. She said that was great but — “If any of these things were to change: your job, your AA friends, your family support — you will need more medication.”

And she said it so suspiciously, too. Like, if I was lying to her about being pretty stable. Maybe I’m not stable? MAYBE SHE SEES SOMETHING I DON’T.

And this is why I hate going to doctors. They make me crazier than I already am.

Anyway, I refilled my prescription and now my body hates it and that’s kind of where I’m at right now.